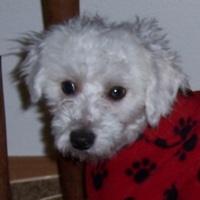 Here's precious Henry.  He had a rough time of it as you can see by the mats he was sporting when we found him!  He's now comfy in a new short coat.  His coat is starting to come in and he is really, really cute now!

Henry is a Havanese-Bichon mix and was given his name by the shelter where he temporarily stayed until we could free him. 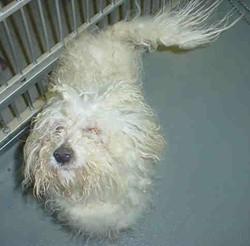 Henry has had hip surgery and been neutered since coming into our rescue. As expected, he is using his surgical leg less often because he does have a good leg to rely on. Right now he is being walked at least 3 times a day (which he loves), and that is helping, but we've reached a point that we're making it less comfortable for him to use his good leg (beans in his boot) so he'll be forced to use the weaker leg. This is for short periods of time, but it does help. 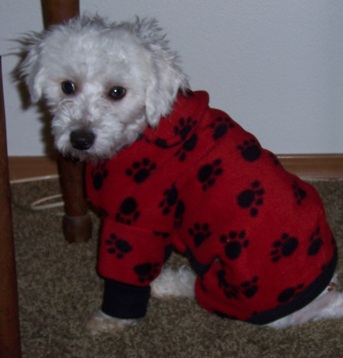 He has turned into the sweetest dog and really wants to attach to his person!! It's clear he wants nothing more than to be loved and accepted, and his greatest joy is laying next to someone, paws in the air, for tummy rubs or the slicker brush.
He will bring lots of love to complete the perfect forever home. He has an amazing spirit.

Henry is currently being fostered in Washington.