Walter (Formerly known as Pepper), almost seven-years old, is a delightful addition to his foster home. His foster mom describes him as a fifteen-pound sweetheart. His black and white coat is somewhat curly and is easy to care for when it’s kept shorter. He has a cute mask over his eyes which just makes him more irresistible.

Walter is house trained and leash trained. He doesn’t do well in a crate and gets stressed, but Walter is very well mannered and can be trusted in the house even when his foster mom is out for a while. No need for a crate for this guy! He sleeps in a dog bed or up on the bed with his people at night.

Walter is a very friendly dog. He loves women and men both and quickly makes friends. He is a very engaging dog and, like most Havanese, will follow you from one room to another throughout the day, just so you’re never lonely. Walter had to learn not to chase cats by following the lead of his foster siblings. He’s not been exposed to young children, but would likely be fine with respectful older children. 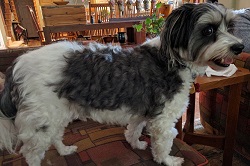 Walter loves playing with other dogs. He doesn’t care much about toys one way or another, but he’s quite drawn to pillows! Yes, Pepper loves sleeping on pillows of all sorts - bed pillows, couch pillows and floor pillows. He’s a dog who believes in comfort. Walter also likes to lie in the sun, whether it’s on a pillow in the house or on his side in the backyard. He’s a real California kind of guy. 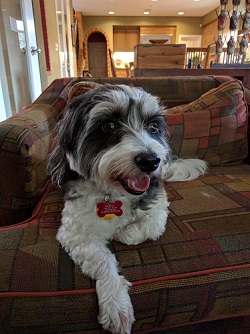 Walter went to an obedience class with his foster mom and loved it! He liked spending time with her and learning new things. He thought practicing behaviors at home was great, too. He responds very well to a positive training approach. Walter also loves going on walks. He isn’t much of a barker, but he does let his foster mom know when someone is at the door or there’s a “suspicious noise” (or a naughty squirrel) outside. He wouldn’t be much of a watch dog though because he’s just so friendly with people!

With his charming personality and easygoing disposition, Walter is a joy and fits in beautifully with his foster family. Everyone is working on making it official and finishing up the paperwork — because Walter is forever home!

Walter is being fostered in Southern California.