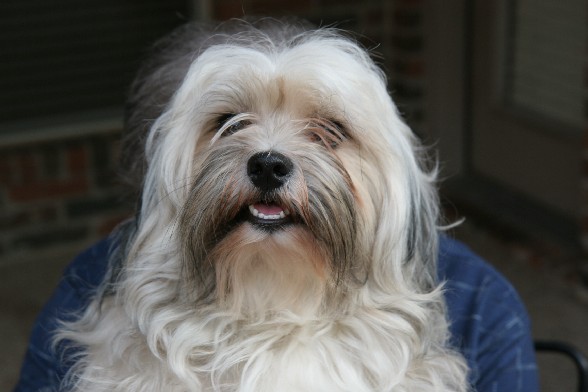 Ricky Ricardo has charmed his foster family and all who have met him. We checked Ricky's dictionary and the word "stranger" isn't entered anywhere! Nope, this guy thinks the whole world is made up of friends. A sweeter dog would be hard to find.
While he loves the Havanese in his foster home, Ricky is particularly enchanted with the 8 year old Daschund and does his best to convince her to play with him. With Ricky as part of the pack of 4 dogs, he enjoys great games of chase in the backyard.


Ricky is thought to be about 18 months old and is 20 pounds.

There are many endearing traits noted by Ricky's foster family. There's the way he snuggles in to sleep on the lap or chest of his foster dad. He also paws the air to get attention from the Daschund. But a favorite heard by the volunteers with  HRI is the way Ricky fetches his foster dad's shoes and brings them into his crate. There he carefully puts them on his bed before crawling on top to nap. He doesn't chew them, mind you. He just likes to fall asleep on top of the shoes of his foster dad.

Ricky is doing well with his house training though he will continue to need attention for this as he adjusts to his new home. He prefers human company while he goes outside, particularly in the evening. He seems to be frightened of being left there so it's particularly important that he learn his people will always wait for him and bring him back in the house.

Ricky is going to be a wonderful family member for the people fortunate enough to adopt him. He is being fostered in Texas. You can sure see what a snuggle-bug this guy is! He loves snoozin' with "Dad!" 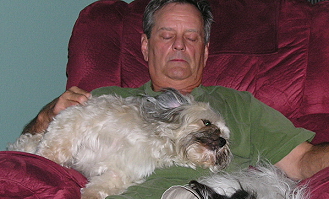