Nine-month old Casper is a happy puppy who loves to play.  You can see his toy stash behind him in his picture.  Little Casper now weighs in at 8 pounds and is such a good little boy!  He loves to fetch, play chase with other dogs, and is so affectionate.

After Casper was de-matted he really came to life.  He instantly felt better and has enjoyed the whole grooming process ever since.

Casper is a happy, energetic, playful pup. He loves people & other dogs. Since being in his new foster home, he has worked magic on Claire (his other foster sister). They love to play together. He is quite the entertainer! Casper came with a bag full of toys; which he loves to dump on the
floor, and then bring them one by one to play fetch with him.  He started it by bringing a stuffed pig, that is as big as he is, and dropped it and gave it a toss. He virtually left the floor with ears flying, got the pig, shook it real good and brought it back for more. He is very self-confident but not an attention hound, not shy, not a whiner, not a chewer, loves a belly rub and can entertain himself quite nicely. 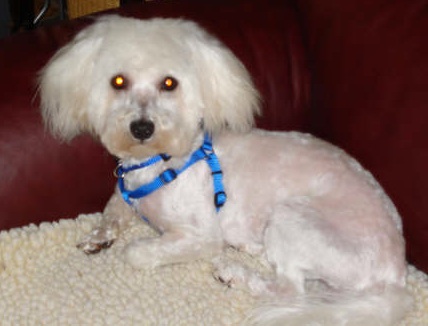 Casper will be a loving addition to the perfect loving home.
He's done very well with house-training but remains somewhat timid when meeting strangers.  However, it doesn't take him long to warm up to newcomers now and he likes both men and women.

Casper is a real bouncer and a jumper. He loves to bounce up trying to get a glimpse of what is going into his food bowl and he can easily jump a 3 foot baby gate!

Casper can be quite a little talker - read "Barker" here but he's beginning to settle in and not bark at everything. He used to even bark at his own reflection in the window but he's finally figured that out!

Casper needs a home where the humans are patient, where someone is home during the day and will continue to work with him as he's still every bit the young adolescent dog!  He will need a strong, loving leader and given his aim to please tendencies he would be a perfect candidate for obedience classes.

Casper was just neutered and is current on all his vaccinations.  He will truly be ready for his forever home once he gets his stitches removed.  Casper is being fostered in TX.