HRI is happy to welcome little Skeeter to our rescue family. 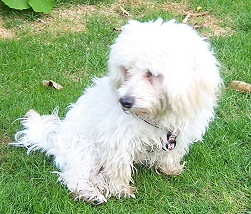 Skeeter was purchased from a Pet Store in Southern California last March as a young Havanese puppy.  His family cared for him until he was diagnosed with bi-lateral hip dysplasia, then returned him to the pet store where they purchased him.

Unfortunately, Skeeter sat at the pet store for several months before the pet store  surrendered him to us. Skeeter saw the vet specialist twice within the first few days after he arrived in foster care. He was scheduled for surgery on both hips. This poor fellow had little or no use of his rear legs at that point, and his lower body muscles have atrophied because he was not treated at the onset of his diagnosis. Compounding the problem, he spent the last several months of his life in a cage. 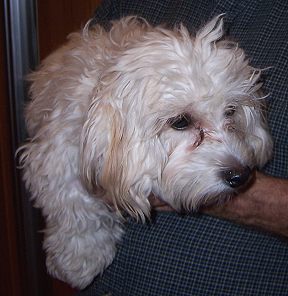 His hip dysplasia progressed into Legg-Calve-Perthes Disease (LCP), a degerative bone disease, in both hips, and his left hip was dislocated, creating constant pain for him. It was very difficult for his foster family to see him dragging his rear quarter as he tried to move to be comfortable. They shared his pain each time he cried because it was nearing time for another dose of his narcotics.

On October 17, Skeeter had the femoral head removed from each of his hips so that a “false joint” will form, allowing him to grow and be the active puppy he deserves to be.

Through it all, Skeeter never lets us forget he’s a Havanese!  He still wags when he sees us and offers kisses without a price at all. We are encouraged by his spirit and look forward to watching that spirit carry him through his rehab process to a healthy, new future.

If you would like to help with Skeeter's surgical expenses, please make a tax-deductible donation.