Nawlins is about 6 years old, loaded with energy and springs from place to place, all around the house, which has earned him the nickname, "Monkee." He was rescued from a Shelter where he was going to be euthanized due to the overcrowding. He was filthy, malnourished and in need of lots of love and comfort; nothing but skin and bones and a very bad haircut. 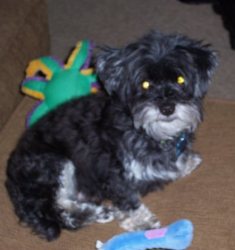 Nawlins is still a small guy. He only weighs 7.9 lbs now, and his hair is growing in nicely. He loves to sit on laps and has discovered lots of things like treats, toys, food, kisses and hugs and even, though he protests,  baths. He is small enough to hide in a purse, and loves to snuggle with his blanket.

Nawlins has made much progress with his housetraining, and is learning to "go" on command. He is the sweetest little boy but does have something called stress epilepsy. If he gets overwhelmed with lots of things going on around him at once he could have a seizure. His fostermom is there to comfort him, to give him a valium, and then he is fine again ~ ready to run and play w 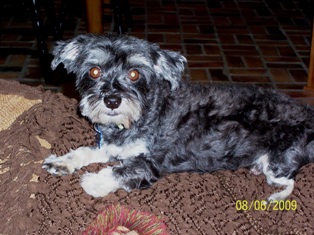 Nawlins is being fostered in Mississippi.