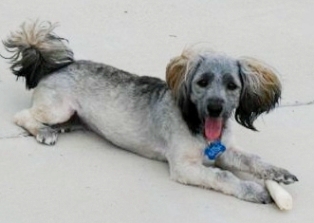 Harry is.....well, he's not brown. It's hard to say what color this 1yr old, neutered boy really is!  His foster mom is sure he started out as a Sable puppy. Now Harry has brown, black, grey, cream...just about every color somewhere on his body.  He starts out dark on top and then it changes to lighter colors as you move down his body. But when you get to his paws, they are dark.

He is very cute, with a sweet face and loving personality!

Harry is potty trained and able to stay home during the day. He needs to be in a home where he would get lots of attention as he is definitely a typical velcro dog. He kind of walks in circles around you -- which makes it very easy to trip over him. His "velcro" tendencies are not the least bit atypical -- he is just at the "more velcro" end of the scale. He likes to sit next to you, if invited, but he will also jump down and go lay on the floor. He does not jump on the furniture -- just puts his front paws up and looks at you, for permission.

He would do great in a home where grandchildren were in and out -- especially if they would spend time with him. Harry needs to learn to "play".  He is very willing, just doesn't quite know what he is supposed to do.

He walks well on a leash, rides in the car (crated and uncrated) although he does not do well crated in the house. He is a little bit of a barker but is learning that he does not need to alert everyone to each chameleon that wanders across the lanai! He is rambunctious where food and treats are concerned so he is being taught to sit while his meal is being prepared and while it is being served. He gets to eat on "OK."  He still needs to learn some basic manners but learns very quickly and will just need consistency in his trainig.

Harry is a sweet little boy -- a very typical Havanese ~ just wishing for a home to call his own.

Harry is being fostered in FL.