Stanley is a grey-bodied, white-socked Havanese boy with the curliest tail we've ever seen. Stanley was found wandering outside a home in Allentown at the beginning of September. Some good Samaritans took him in, but they already owned a dog and tearfully handed him over to HRI. 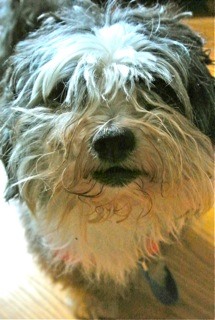 In the first picture you can see how severely matted he was, including burrs on his adorable raccoon-masked face. He was whisked away to the vet's office for a complete shave, some dental work and a full work-up. He is in great health and is estimated to be a very young eight years of age.

Stanley loves walks, especially in his current Greyhound streamlined coat. He prances, holds his tail high and can easily walk a mile at a good pace. He's a great eater, but, we've found, doesn't care for green beans. Clearly Stan came from a home environment since he is completely house-trained. Not a single accident. He is learning to trust and has become very affectionate with his foster mom and dad and the teen in the household. Many nights he will head to her bedroom to assist her with her homework, snoozing happily in the comforter.

No car ride is too short for Stanley. He's a great traveller, but prefers a dog seat or restraint to a crate. We don't think he was crate-trained in his other home, but, since he is such a gentleman, he hasn't had to be put into one, preferring to hang out in the house with the resident dogs behind door gates. If you are looking for a snuggler, Stan is your man. Whether at the computer or in bed for the night, he wants to be right next to you. We are working on commands such as sit and stay and he is a quick learner. When we come back into the house from his walk, he sits and waits to have his retractible lead taken off and his HRI-mandated lead put on. 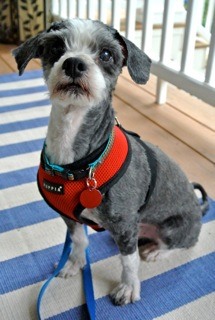 Because we don't know Stanley's background, a home without children is recommended. We think Stanley would do well as an only dog and will require patience on the part of his owner/s as he learns to trust and love them. 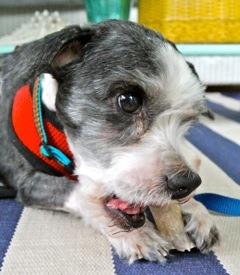 Stanley is being fostered in PA

A donation will be requested to adopt this dog. The recommended donation amount will be based on the dog's age, and medical and behavioral issues, if any.  A completed application is required if you are interested in adoption. Thank you for considering a rescue dog!