In May of 2012, Fluffy Lu came to HRI in desparate condition, unable to even walk out of the shelter where she was found. Her ribs showed and she was almost hairless. With lots of love and attention, she began to heal in her first foster home.

Fluffy Lu moved to what was thought to be her second foster home. Her sweet and dignified nature captured her foster mom's heart and Fluffy Lu found her forever family where she lived out her senior years.

Fluffy Lu brought a lot of love to her family in the almost 3 years she spent loving them. She is very much missed.

Fluffy was fostered in Georgia and Texas. 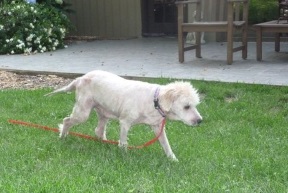 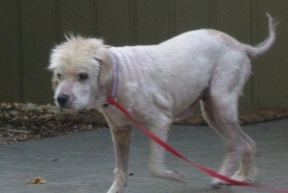 Fluffy's mom wrote this beautiful note about her girl:

"Fluffy went to the Rainbow Bridge yesterday. Her legs finally gave out and she couldn't stand. She was totally blind and deaf as well. I recently bought a house and moved so she was totally baffled. She could mask her disabilities at the old place since she followed the same path. She was beginning to learn at the new home; when her legs weakened.

I said a prayer that I would know somehow that she was OK with my decision. She whined all the way to the Vet's office but when I walked to the counter to check in she stopped whining and was quiet and made her peaceful little smacking sounds until she was gone. She went to the crematory in her doggie bed with little pink fleece blanket with "Diva" written all over it covering her. These items came with her from Joyce. She really held her "linens" dear too.

What a dignified old girl she was until the end. I had her almost 3 years and I think she enjoyed her life during that time. I'll miss her!"