Almost three years ago Ebbie came into HRI after being surrendered by her owners.  She reportedly had a "blister" on her belly that had been there "a year or so" and had recently given birth to four puppies.  Two died at birth. Ebbie's owners said they didn't know she was pregnant. She whelped her babies all alone in the night. The owners came down into the basement the next morning to find two puppies dead and two alive.

After Ebbie had her puppies, her owners took them away from her and gave them to another female that had recently delivered. Ebbie had given birth to many litters of puppies before this litter according to her owners. Now she was no longer a profitable bitch. She was 8 1/2 years old. 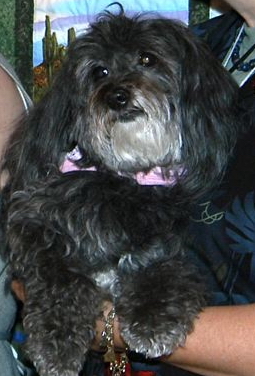 When Ebbie arrived in her foster home, she was seriously underweight. She had a golf ball sized tumor on one of her mammary glands. It was no blister. Her breath stunk which was explained at her first vet visit. Her mouth was full of infection from rotted teeth. Because of the infection, however, she needed several weeks of antibiotics to get her strong enough for dental work.  She also needed to gain some weight. The mammary tumor removal and her spay couldn't happen until her mouth was treated.

After two weeks of antibiotics, Ebbie returned to the vet for her dental cleaning. She'd begun eating a little better as her infection improved. She was declared strong enough for her dental surgery.

So extensive was the decay in Ebbie's mouth that she had 21 teeth removed that day. She returned home on more antibiotics and pain medication. She had to recover from her dental work before she could be spayed and have the mammary tumor removed.

After several weeks, Ebbie went in for her next surgery. Her mammary tumor was removed. It proved to be benign, a great relief to everyone following her story. When she was spayed, she was found to have closed pyometra. We were grateful Ebbie was able to be spayed before she suffered any ill effects from this for certainly she wouldn't have been able to fight off a systemic infection that could have come from her infected uterus.

Ebbie was in foster care 6 1/2 months before she was adopted by Lee and Dale Podolon. She had heart problems, possibly related to the neglect of her teeth and the ensuing infection.

Ebbie had almost 2 1/2 years of knowing she was a loved family member before she left this world after her gall bladder ruptured.

There will never be another Ebbie for those who loved her. Those of us who met her are grateful for her presence in our lives. You can also see Ebbie in our Rainbow Bridge section.