It is with a heavy heart that we tell you that we put Bensen to sleep this weekend. Bensen was less than a year old. We knew when we took him in that he might have some sort of brain problem, but we wanted to give him the chance to be somewhere safe where he was loved and then find out if there was something wrong that could be fixed. What his foster Mom observed while she had Bensen seemed to confirm that there was something wrong with him. He wasn’t good at going up stairs, he cried a lot, he really wanted to be outside more than anything, and he wasn’t always responsive to her. It seemed that when she called him it took a while for him to “register” that someone was talking to

him. He was always very restless, and had some intermittent rigidity in his back legs.

We took him to see the neurologist, and her analysis was that Bensen was showing symptoms of diffuse forebrain disease, and that there were a number of potential causes, including a developmental malformation resulting in hydrocephalus and/or hepatic encephalopathy. Bensen was put on the special diet for dogs with liver shunts and meds to see if he started to show any signs of improvement. Unfortunately his behavior was not changed at all, and the neurologist and vet both felt 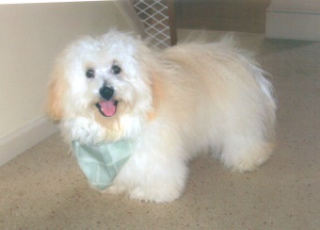 that even if there was a liver shunt, his behavioral issues were unlikely to clear up and his quality of life would not improve.

This was such a difficult decision but one that we made so that Bensen could finally rest and be at peace.