Seven-year-old Murphy is sweet natured and shy. He takes a while to warm up to people, but quickly made friends with the other dogs in his foster home. Murphy is approaching his foster family more often now and giving them gentle sniffs. He also learned to take a treat from someone’s hand. He does well interacting with the two teenage girls in his foster family, but probably would be overwhelmed by younger children.

Murphy is a very handsome 13-pound guy with a cream colored coat and darker brown points on his ears and tail. As you can see in the photos, Murphy was trending with a blue mohawk for a 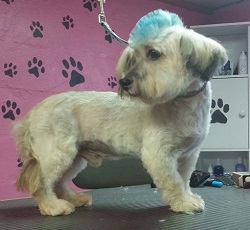 time, but it's since grown out.

He’s feeling much better after having had dental work recently. His energy level is increasing. Murphy even got the “zooms” the other day and ran at high speed just for the joy of it, making his foster family smile in delight.

Murphy is working on his house training and is doing well with supervision. He will even go to the door to indicate he wants to go outside.

Murphy is crate trained and will go to his crate when he wants some quiet time to watch the world from the comfort of his man cave. He is also leash trained and loves going on walks. One of the teenagers in his foster home likes to take him running. He loves it and squints his eyes as he runs into the wind, his hair blowing as he races ahead.

Murphy LOVES playing with other dogs! He has several doggie “cousins” in his current foster home, including several large dogs. He gets very excited when he sees them because he anticipates a very fun play time. At times there are six dogs playing at once, Murphy right in the middle and loving it all. 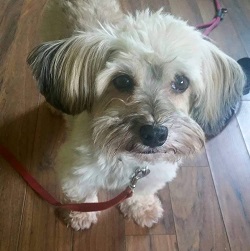 Murphy is looking for a forever home. He must have another well-socialized dog or two since he takes many cues from his canine companions. We also know he loves the company of other dogs. Though Murphy follows people in his foster family from one room to another, he remains a very shy dog who isn’t comfortable with being handled. He enjoys watching the action from the sidelines. He is most comfortable with adults and teenagers. The energy and activity of younger children will be too much for him. He will probably never be a lapdog, but Murphy can add a lot to the family who adopts him. His sweet nature is very endearing and his excitement and anticipation about going for a walk or playing with another dog makes his foster family smile every day.

Murphy is being fostered in WV.