Bentley came to us from the Humane Society, after verification by a breeder that he was indeed a Havanese.

About half way home, after picking him up, I started mentally reviewing my applications, remembering a potentially perfect situation if he was actually the type of dog he seemed to be. 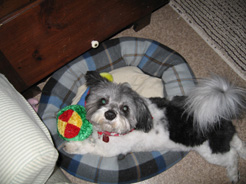 It was obvious, after his first week in foster care that he was indeed the perfect dog for the applicant I had in mind. He immediately made friends with everyone in our house (me, wife, daughter, 2 Havanese). He always wanted to be in someone's lap and would stay there as long as you wanted to pet him or until he fell asleep.

He learned very quickly (I know, all Havanese do), loved to fetch, and was quiet, except when people came to the door, when he needed to go out, or was begging. He welcomed everyone who came to our house with a wagging tail but no jumping.

The application under consideration came from a family that was looking for a companion for their son, who had been in an auto accident  resulting in his becoming a quadriplegic - although he has since regained some use of his arms and hands.

Even though they had two other larger dogs, his parents wanted him to have his own lap dog.  After some investigation, they decided that a Havanese would be best for their son's needs (smart people). While I suppose almost any Havanese would have sufficed, it was obvious to me that Bentley was particularly well suited for this "assignment".

After one week in his forever home Bentley settled in very nicely and is performing his "job" perfectly.  He spends most of the night sleeping with his boy and is very happy to be in his lap. I know that all the petting Bentley desires will help with rehabilitation of his owners arms and hands and the enjoyment of this companion will hopefully lead to increased healing. 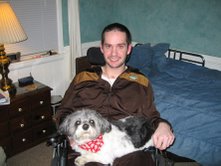 Bentley was sent to us for a reason. This was truly a match made in heaven. We always know that we do what's best for our rescues. I now also realize more fully what an amazing effect our efforts have on peoples' lives.