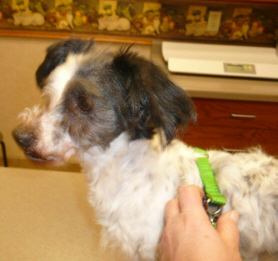 Ivy came to rescue late this Spring from a puppy mill in Wisconsin. Despite many years of poor care, Ivy is a happy little dog who brings a smile to everyone who meets her. She is inquisitive, friendly and quite a party girl. Ivy loves being the center of attention.

In her foster home Ivy is discovering the joy of dog beds, bully sticks, ear scratches, gentle pets, toys, walks on a leash and plenty of food and fresh water."Life is GOOD!" says Ivy. She runs with great joy down the sidewalk with the rest of the Havanese pack. Freedom is glorious. 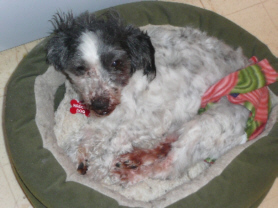 Sometimes it seems like Ivy is looking around at the world in wonder. Grass, dog treats and television all seemed foreign to her when she first came to rescue. Now she's taking them in stride.
Ivy has also learned to play with toys! It's really cute to see her picking up toys and tossing them around a bit. She has even starting to run after them though she doesn't have the idea of  "fetch." She has also developed favorites. That's quite an accomplishment for a little dog who was denied access to such wonders that we take for granted.

Because Ivy is quite a climber (we think she might be imitating the cats in her foster family) she sleeps in a crate at night for her own safety. Ivy is a smart little dog who has problem solved how to get up onto the counter to look out the window (she jumped from a chair to the table to the counter) and is brave enough to climb to the top of a cat climber.

Ivy was spayed and had a hernia repaired. She also  had some much needed dental work done and her house training is coming along. Loud noises and sudden movements still frighten Ivy, but this brave little gal takes assurances well and gives life another chance over and over again. She rewards those who stop to pay her some attention by giving a quick kiss or  laying her head on your shoulder.

Ivy will be a wonderful companion for a quiet family when she's had time to put on some weight and learned more about the world. She would love to have a small male dog as a playmate.  Watch to see this sweet girl blossom as she moves into the summer.