Spike was turned over to HRI from another rescue organization who took him in when his owner passed away. Spike is about 5 years old, although you wouldn't know it by his puppy-like shenanigans, and he weighs about 11 lbs.

His SA is easily controlled with weekly medicated baths. In addition, he is on Cyclosporine in an effort to stop the progression of his SA. 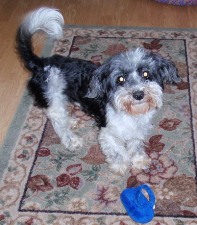 Since Spike has come into rescue he has become more and more self confident. He is great with other dogs. He loves to play with small squeaky toys. He is happy to play by himself too - tossing the toys around and racing to get them. He is happy, happy, happy - and loves to sit in laps.

Spike is crate trained, up to date on shots, neutered and house trained.