Sammy is about 9 months old and despite a rocky medical history as a young puppy, he is now doing very, very well. He received a 'haircut' when he first arrived - translation - shaved completely down to get rid of his matted coat, but it's grown out quite a bit and he is now a very handsome little guy. 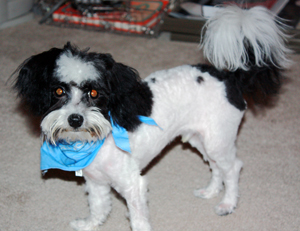 Sammy is much more comfortable now! He is now alert and active, runs in the yard (usually after his tour of the perimeter) - he can now be redirected and stopped mid-tour to come inside. He follows the 'pack' into the house, so seems to need the interaction of other dogs. He loves his treats "cookies" and even stands on his hind legs to try and reach his treat! He's a smart little guy.

He can still be very timid and 'squirmy', and is still shy and afraid of people. But each day it's becoming clearer to Sammy that people are good! He is very loving and oh-so-typical Havanese in that respect. One of his favorite places to snooze is right in your arms, or even snuggled against your neck!

Sammy sleeps all night in his crate, and he's a cuddle bug - once you get him up next to your body. He squiggles until you get him there, but once he's next to you, he lets out a deep sigh and relaxes against you. 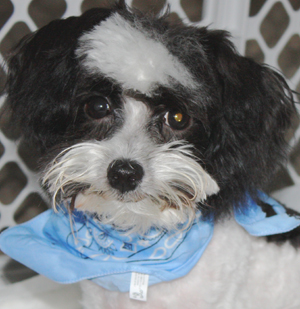 Sammy is a tiny little guy and his foster mom is working on fattening him up and continuing her work at getting him socialized. He is learning the world is not so scary after all, and a patient and loving home that will continue working with him is part of his wish list in a forever home.

Sammy is being fostered in TX.

After much discussion between Sammy's foster family, their vet, and the Board, it was decided he should be euthanized. Sammy came to us with an unspecified neurological or physical problem after he had just spent thirty days at the vet’s office.  After all that time, the vet could not say for sure what was wrong with him, and because he was a baby, he went back to his home and was fearful and couldn’t be held.  His family turned him over to us and as you all know, he went to Angie and Michele’s house so we could see if we could make up for all that time at the vet’s office.  He seemed to be making improvements, and I know that we all “know” Sammy and the love he got with Angie.  Recently his behavior started to become more erratic and he seemed disoriented.  He would move his head back and forth and start snapping at the air without provocation.  We took him to see the neurologist, and after observing him and talking to Angie about the behavior he exhibited, the doctor said that it was most likely a central vestibular problem in addition to some other brain issues that were affecting his sight.  The doctor said that Sammy’s quality of life would not improve and that the defensive biting posed a danger to anyone around him.