3 year old Bandit is a quirky little Havanese with a huge streak of determination to overcome any obstacle thrown in his way. When he initially came into HRI, Bandit was immediately scheduled for life-saving surgery. He had a portocaval liver-shunt that was surgically repaired and he is now looking forward to a new life of improved health. 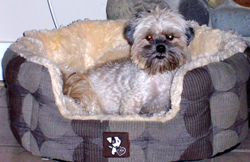 A prescription diet, in combination with veggies seems to agree with him, and he is beginning to show much improvement.

Bandit has gained weight, in beginning to show trust in those caring for him, and has been accepted by the other canine members of his foster family. He missed out on much of his early socialization, so his foster family has been hard at work showing him the world we live in, is a good place.

He has discovered that having canine playmates can be entertaining, he is curious about things as small as a toy ball. The human caretakers offer of pets and cuddling is comforting, and  the world is wide open to welcome his exploring little personality. Bandit’s not begun to jump in headfirst playing just yet, but he is showing interest!

Bandit needs some dental work completed and he’ll have his liver values run shortly - in the meantime we are all celebrating each baby step, along with Bandit, who has already made huge strides since the day he entered HRI.

Bandit is being fostered in WA.

After much discussion, it was decided by his foster family, their vet, and the Board that Bandit should be euthanized. Bandit was one of our liver shunt dogs.  He was very sick when we got him because his family was not treating his liver issues, and we immediately took him to a vet who said we should do surgery.  Bandit was grumpy when we got him, but our hope was that after the surgery, once his liver was working better, the toxins in his system would decrease and he wouldn’t feel so awful.  His surgery seemed to go well, and he then had a lengthy recovery with Jane and Paul, though his behavior did not improve as quickly as we had hoped and he remained somewhat antisocial and grumpy.  His follow up vet appointment showed that his bile acids had not decreased to a normal level, and we were going to do a second surgery to re-tie the shunt in case it was leaking.  In the past few weeks, his behavior started to deteriorate again, and he became very snappy and unpredictable, and in subsequent conversations with the surgeon it seemed that this could be the result of his liver being so small that it just couldn’t function adequately, so toxins were probably building up in his system and additional surgery would not correct the problem.  Jane and Paul and Lindsey and Nik all devoted so much time and love to Bandit and he was just too sick and as a result a very unhappy little dog.