Josie is almost 7 1/2 years old but she doesn't know that!  She pounces and plays like a puppy even though she's a larger Havanese, weighing 20 pounds. She doesn't know that either, and climbs right into any stationary lap for some special one-on-one attention every once in awhile.  She is incredibly sweet and will easily fit into a family routine.

Josie came in to HRI because she enjoyed chasing cats and she loves to recognize newcomers with a bark or two.  She probably wouldn't be a good candidate for apartment living.  She loves children, is very gentle around toddlers, and plays with toys. She is incredibly sweet. 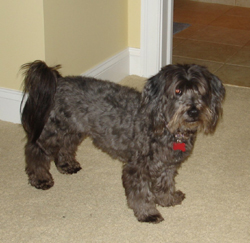 She is house trained and if you forget she will come and get you and offer a gentle bark as a signal.  She would love a fenced yard where she can run free but she has also gotten used to walks on a retractable lead in the country.  She runs into and loves sleeping in her crate in the big people room as long as you remember to give her a treat!  She comes when called and will sit patiently and wait for a reward.  She has full run of the house and has not gotten into any mischief at all!  She loves playing tug and catch me if you can with her foster brother too.

Her coat is magical in that it changes color depending on the light.  Sometimes she looks tobacco brown but mostly she looks like a mix of silver and black. 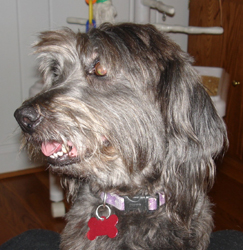 She's the victim of a scraggly haircut right now but she still loves to be brushed and will actually fall asleep.

She is being fostered in PA