Muffet had a foster home that provided her last months with love and security in her golden years. She was really sweet, quiet and a true lady.

After much discussion her foster mom in NC, the vet and the Board decided that Muffet should be euthanized.  She came into rescue from a shelter and she was estimated to be somewhere between 12 and 14 years old.  Muffet was with her foster family for over a month and she never enjoyed being held, preferring instead to just go off by herself and take long naps.  Bathing was a chore, Muffet would bark and scream the entire time she was being washed.  She had a few seizures, and then her anxiety level seemed to increase and she would pace and was unable to get settled.  She also had some skin issues and of course the treatment would be bathing her frequently.  Being held and touched really upset her.  We realized that she was also not interacting with her foster family, which for a Havanese is so sad.  Can you imagine your dogs not knowing who you were or caring if you were there or not?

Upon a lot of reflection, we decided that caring for Muffet would make her miserable and so we decided the kindest thing to do was to let her go.  Friday morning her foster mom and our Board President took her to the vet who was very kind and compassionate.  We all felt that we had done the right thing by releasing Muffet from a world where she was just existing. 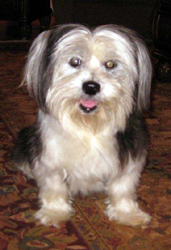