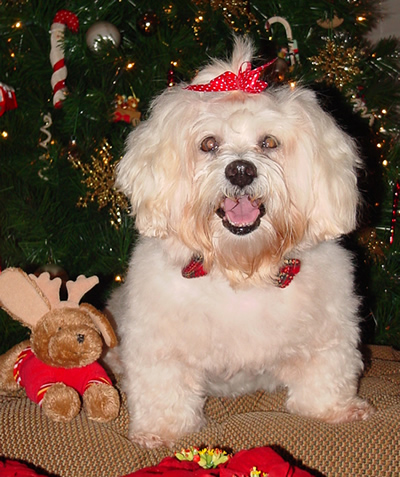 walk on a road deep in a forest in North Carolina. The people who found him weren't sure if he had a tail. He was filled with mats to the point where he couldn't relieve himself without it being trapped against him. His legs were bound with mats, preventing him from fully extending them. What's more, this little dog was in the woods on a road that he couldn't see, nor could he see the people who found him (or those who left him.) He was completely blind.

Scotty came to Havanese rescue through another rescue group that was unable to provide him with the medical care he needed. With Havanese rescue, he was provided with surgery to remove his cataracts. Scotty could see! Photos of him looking out the door at an amazing world were shared with volunteers at that time. But more important to Scotty than the world he could see through that door was the love he received in his own home. Both worlds were new to him and he relished them with the Havanese spirit our dogs tend to share. Though he eventually lost his sight again, he had his family and their love.

Tonight we received the sad news that Scotty has left us.

I know Scotty is very much missed. He left footsteps on a lot of hearts but most especially on the people who loved him and cared for him so these last five years.